Reframe Language on How We Work Today 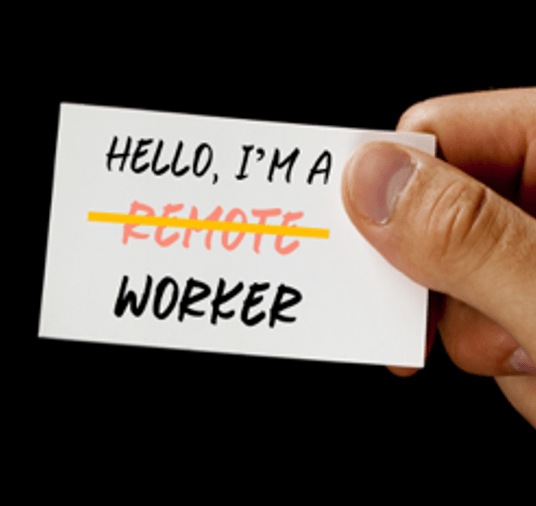 What do we mean?

Recently, I saw a news story1 about a trade agreement meeting. The newscaster introduced the segment by saying, “Ministers met virtually, … [the reporter took a pause] … uhhh ummm, I mean they met, to discuss…”. This exactly captures a dilemma that many of us are facing right now as globally large numbers of people are working from home due to the pandemic. How do we call this new way of working?

How we were working

Well, this was an issue even before the pandemic. Estimates were that in many countries over 60% of knowledge workers were doing work outside of their offices or working apart from their manager and team. This was either as a formalised, full-time way of working or informally occasionally doing this. The average person working this way was male, university educated, 45 years or older, earning a good salary, and working in a large private sector organisation. Despite over 80% of employees expressing a wish to work this way, it remained a privilege for just a small segment of only 7% of workers.

Pre-pandemic there was recognition that this way of working would be increasing. A few years back, executives predicted that the majority of their workforce would be working outside of the office by 2020. That indeed came true but not by leadership or workplace design, but by completely unforeseen circumstances. While leaders and HR saw flexible work designs as a way to attract and retain a diversity of talents, it was still not the way most people worked. Still numerous studies pointed to financial savings, increased retention, positive climate benefits, and increased productivity by working outside of the office. But this knowledge did not radically transform workplaces. Working from home or in other locations outside the workplace was not the norm, in spite of all the perceived benefits.

In a global study that I co-conducted in 2019, we received survey responses from over 4000 people in 89 countries about where and how they work. One of the main findings was that being allowed to work from home tended to be a privilege only granted to some and only for a limited amount of time. The vast majority of respondents were sure that their jobs allowed for at least some flexibility in terms of location. Still, this didn’t impact the likeliness that people were comfortable to ask to be allowed to work from home at times. Today, this has completely changed and what often was a ‘right to be earned’ has become the regular way of working for a large share of the workforce globally.

Working from home has become the current norm for many employees in jobs that allow for work to be done in this way. No longer do they need to ask permission, but instead it has become the mandated prescription to protect health. While the ability to work from home has now opened up to many people who were not doing this previously, discrepancies remain in who can do this. Not all people are included based on the nature of their work, such as service providers, health care, manufacturing, and essential workers. Many low-income jobs have no ability to be performed outside of the office or workplace. Also, some people may not have a space, equipment, furnishings, or quality internet access for a home office. When not well designed and supported, inequality gaps may be further widened in this new working model.

For those now working from home, this has become a new standard for how they will view work going forward. The barriers to employees asking and managers deciding have been removed by the new default of many working from home. Their lived experiences working from home now disprove any excuses that were previously given for why employees could not do their jobs outside of the office. Productivity and economic impact have been shown to still be achieved when working from home. During the summer of 2020 in the U.S., 62% of workers have worked from home, which is double pre-pandemic rates and this way of working now accounts for 2/3’s of U.S. GDP. A majority of employees in France and the U.K. who have been working from home during the pandemic, say that they want to continue working this way.

Many workplaces are reassessing their policies and practices on where work is performed, and in the U.S. one survey found over 80% will allow some form of working outside of the office. Our ‘new normal’ will continue to evolve and likely be very different from the past. Ahead will be how to equitably manage employees working from many locations, including the office, home, and other spots.

An opportunity to reframe how we reference work going forward

The pandemic has accelerated a shift in where and how work gets done. Literally overnight, what was happening within a small subset of the workforce has now opened up to include much more people. Needed now is to leverage this and reset our models on work to shift away from location and to instead be about collaboration, purpose, and results, as well as expanding this way of working to equitably include more people. This will involve many changes. One of the first being to reset our language to accurately reinforce the new working design.

Often, we refer to this way of working as ‘remote work’ or the people who do it as ‘remote workers’ or ‘distance workers’. Underlying these terms, is the default perspective of a ‘normal’ worker is office-based. ‘Remote’ only emphasises that people who work this way are not the norm; they are outliers. This casts a shadow over the person and their work. The word ‘remote’ brings up negative imagery. It’s hard to feel warmth towards a ‘distant’, ‘remote’ person. As warmth is one of the key criteria that we use to evaluate people, this can trigger behavioural challenges towards collaboration, performance evaluations, and career opportunities. The phrase of ‘remote’ clearly does not put this way of working in a desired framing nor set it up for the new normal going forward.

Similarly, we frequently call this way of working as ‘virtual work’. The issue with this framing is that ‘virtual’ is an imitation of the ‘real thing’. It implies that somehow this is ‘not real work’, and by default ‘real work’ happens in the office. Again, this term is problematic, as the news reporter realised when he said “met virtually” and then corrected himself to simply say “met”.

Now is the time for a reset on how we think about, talk about, and do work in new ways. Instead of using adjectives that qualify the work based on a location perspective, let’s use words that focus on the work itself and the people themselves. Let’s just call it ‘work’ and let’s just call them ‘workers’!

Inclusive ways to make this reframing of perspectives happen

To support surfacing limiting perspectives and implementing new policies and processes to support how work gets done, Lisa Kepinski and Tinna C. Nielsen have shared many examples in The Inclusion Nudges Guidebook (3rd edition, 2020) and 30 examples in each of the books in the Action Guide Series.

By applying Inclusion Nudges, you can more effectively reduce the impact of bias towards others and how they work. These behavioural designs can help you get people motivated to make new changes, take action to reset how work gets done and evaluated, and shift the language and mental models. These designs can also be used to surface previously unseen patterns of who has access to working from home and what could be the implications of gaps in who can and who can’t. As you go forward with redefining work in your organization, we encourage you to try apply the change methodology of Inclusion Nudges. These make inclusion the norm everywhere, for everyone.