Begin With Activating Allyship by Seeing The Unseen 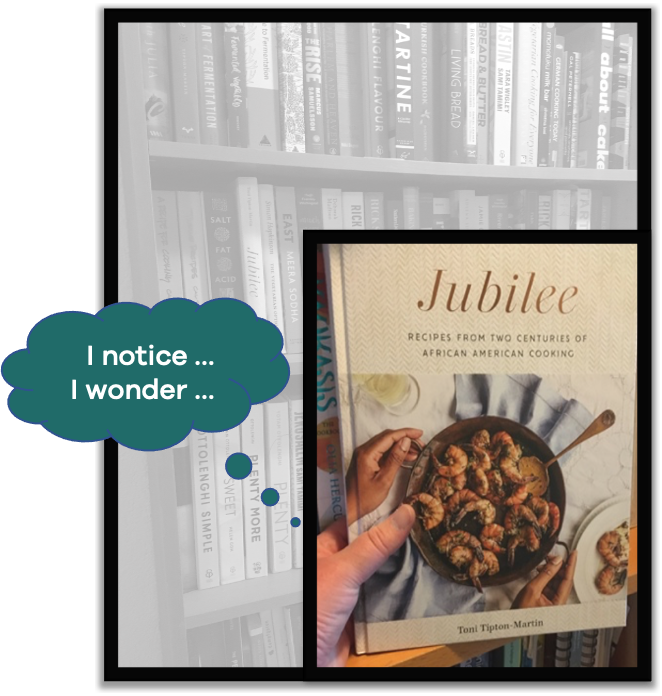 I don’t recall seeing that before …

I have a life-long love of cooking, and that includes reading a lot of cookbooks. My collection is quite large, spanning many cuisines. Recently, I received via post the journalist Toni Tipton-Martin’s latest, award-winning cookbook Jubilee. Cookbooks can offer not only inspiration through recipes but also stories about people, history, culture, and values. In many cases, cookbooks are important historical and anthropological studies stemming from generations of storytelling and passing on cultural knowledge that may not have been previously recorded in writing. This new book (Jubilee), according to the author’s website, offers “a rich, varied picture of the true history of African-American cooking: a cuisine far beyond soul food.” I couldn’t wait to receive it. When I opened the package and pulled the book out, my hand was just below the photo of a hand shown on the book cover. I was struck by the difference in skin colour—my own white skin tone and the photographed person’s brown skin tone. This realisation caused me to pause. I sat down and kept looking at the cover, thinking “I don’t recall any photos of Black or Brown people in other cookbooks that I’ve read. I wonder why?”

To see the unseen

The juxtaposition of the two hands (my own and that of the person in the cover photo) sparked curiosity in me. Noticing this led me to wonder, are there other examples like this in my cookbook collection? I went through all my cookbooks and recorded the skin colour where a person was shown. Guess what? Less than 10% of all the images showed Black or Brown people. This prompted me to wonder if this was because the majority of my cookbooks were by authors who were white North Americans and Europeans. So, I did another analysis which revealed that of the cookbooks that I owned, just over 50% were by white authors. My inquiry showed that regardless of the author, across nearly all of the books there was a strong skew towards photos of white skin-coloured people. We are all susceptible to implicit bias despite our best intentions to be inclusive and even when it may work against our own group. Bias can show up in many seemingly unexpected ways in our daily lives. Cookbooks can be one of these mirrors to seeing wider systemic exclusion and inequalities in our world.

Noticing these previously unnoticed patterns in this context of cookbooks, I felt the need to stay in the reflective moment.

I wonder why people with different skin colours are not shown in the cookbooks, especially given the high numbers of Black and Brown people working in the food sector? I wonder what are the implications of not showing them?

I wonder how could the photo decisions been influenced by commercial and societal concerns? I wonder if the decision makers were aware of the patterns of people pictured in the books?

I wonder could this be cultural appropriation, which is taking and erasing the food heritage from some cultures and peoples to make it feel more ‘acceptable’ to majority group people?

Words from an interview with Asma Khan, the restaurant and social entrepreneur and author of Asma’s Indian Kitchen, were echoing in my mind. “A lot of countries take the food and don’t respect the culture. But you cannot have my food if you don’t have me. It is a connection and if you take that away, you disrespect me. … You can be from any culture, be any colour, you can cook our food but you must respect our traditions and our people.” Being seen is being respected. If we don’t see the people that the food traditions are about, then how can we fully value them and what they have to teach us? By not showing photographs of a wide range of people, then how are we limiting who are the readers, cooks, and the eaters? How are the images upholding the status quo of inequality gaps? This is not just about a photo; it is a deep and heavy insight into real life.

There is power in this process of seeing something previously unseen. Calling it out with a statement of “I notice…” and then reflecting with “I wonder” questions can raise the emotional impact on the unconscious mind where the vast majority of our thinking occurs . In my case, this was triggered by seeing the two hands with different skin colours. In other cases, we can design and apply interventions to spark this ‘aha’ effect. We call these Feel the Need Inclusion Nudges.

Designs to see the unseen

These are just a few of the ways that you can apply designs to reveal hidden patterns of bias. You can adapt these to your context. By using designs to surface seeing what is deeply enmeshed in the current state, then motivation is triggered towards taking action to address what is now seen and known.

Caution: Seeing the previously unseen is a first step. But a heighten sense of inequality is usually not sufficient for systemic or behavioural change. Allyship requires moving beyond the ‘aha’ effect or entering the ‘woke’ state on injustice. We need to push for taking action to address the inequalities revealed. For more inspiration on ways to do that see the blog article Ally by Actions.

Get access to more designs to spot hidden patterns

By applying Inclusion Nudges, you can more effectively reduce the impact of bias. A key way to start is to surface hidden patterns. You can’t change what you don’t see. Inclusion Nudges make it easy to do this in a way that change makers are not ‘shot as the messenger’. As the ally, people realise the pattern themselves through the experience of the Inclusion Nudge. The result is that they are more motivated to take action. The designs in this article are described in step-by-step details in the Inclusion Nudges Guidebook, and also in the Inclusion Nudges for Motivating Allies book. We encourage you to try applying the change methodology of Inclusion Nudges. These make inclusion the norm everywhere, for everyone, and by everyone.